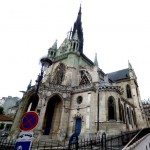 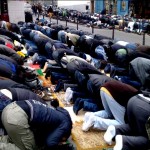 The Al Fath Mosque on Rue des Poissonniers in Paris receives thousands for Friday prayer, way beyond its capacity. The surrounding streets are entirely given over to worshippers.

Around the corner is the vast church of St Bernard de la Chapelle, whose doors appear to be permanently padlocked. Amongst local proposals is that of converting the church into a mosque. I'd hazard a guess that this is not what was - during the French Revolution - envisaged by "dechristianisation".

(The photo of the prayers is mine. The church is from Google Street View.)

The Tragedy of the "Chav"
Sic Semper Tyrannis
Faith vs. Honesty
Veil Of Ignorance
Slavoj Zizek. WTF?
On Human Scale
Party People
What Does It Mean To Be Educated?
Liberalism Will Eat Itself
Democracy: How Vulgar!
Types of Tolerance
A Prophet of What?
Nothing Left
I Think Therefore I... Am In Court
Paris Fashion: Weak
Cathedral of Worms
The Joy of Guilt
BA in Equality and Bomb-Making
The Comeback Kids
Fun With Moral Vacuums
Get Your Identities Out!
Human Rights vs. Human Votes
The Child-King
Mack the Knife
Café Society, Human Society
Forgiving It All Away
Bogus Power Seekers
God(s) Help Us
Anthropology: Don't Try It At Home
Bonaparte Was A Tiny Minority
Stalin Had Faith
Nanny’s in a State
Dead Horses
Destruction is Cool. Harvesting isn't.
Chronic Diversity Syndrome
Sleeping Gods
500 Pages Of Nothing
Interfaith Dialogue
The Fallacy of The Centre
The Word Becomes Flesh
Dog Marxism
I Am Not A Pixel
Freedom vs. Freedom
Camille Paglia
Spirituality via Slaughter
You Can't Define What You Can't...
The Wrong Kind of Enlightenment
A Dutch Knack for Apartheid
End of the Ride
New Labour's nemesis: the BNP
Is Secularism Coherent?
Public Theology
BNP Celebrates Diversity. Oops!
Not all Pride is Equal
Not all Anthems are Equal
Postmodernism Generator
Theories change. So what.
Repetitive Brain Injury
More Less Is Not More
Home Isn't Where The Heart Isn't