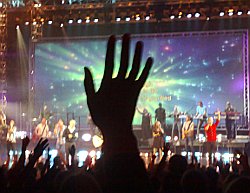 The separation of church and state sounds good to me. So does the end of all suffering, war, inequality … etcetera.

Oh well. Back in reality, I’m not so optimistic. Unlike some of the atheist authors - whom otherwise I generally agree with - I don’t think a world without politically-impacting religion is worth talking about, let alone holding out for. This stuff is innate phenomena. It will always emerge of human nature; to deny that is a bad start to any ideology.

Considering its expectations for the relevant individuals (i.e. the religious), I’m not sure secularism is an intelligible idea. If as an individual you are ("privately") religious, why or how would or could you be simultaneously prepared to be ("publicly") secular?

For better or worse, your religion is your universal moral world-view. Your politics are your worldly moral world-view. Surely, the former contains the latter. ‘Separating’ them makes as much sense as separating ‘fish’ from ‘cod’. (Unless politics is thought to be only a bureaucratic and amoral domain - in which case we’re stuffed anyway.)

For these reasons, I’m a pessimist.

(The picture is a Hillsong Pentecostal service in London in 2008. That’s not a spiritual aura emanating from the worshipper's hand; it’s an onstage light show.)

The Tragedy of the "Chav"
Sic Semper Tyrannis
Faith vs. Honesty
Veil Of Ignorance
Slavoj Zizek. WTF?
On Human Scale
Party People
What Does It Mean To Be Educated?
Liberalism Will Eat Itself
Democracy: How Vulgar!
Types of Tolerance
A Prophet of What?
Nothing Left
I Think Therefore I... Am In Court
Paris Fashion: Weak
Cathedral of Worms
The Joy of Guilt
BA in Equality and Bomb-Making
The Comeback Kids
Fun With Moral Vacuums
Get Your Identities Out!
Human Rights vs. Human Votes
The Child-King
Mack the Knife
Café Society, Human Society
Forgiving It All Away
Bogus Power Seekers
God(s) Help Us
Anthropology: Don't Try It At Home
Bonaparte Was A Tiny Minority
Stalin Had Faith
Nanny’s in a State
Dead Horses
Destruction is Cool. Harvesting isn't.
Chronic Diversity Syndrome
Sleeping Gods
500 Pages Of Nothing
Interfaith Dialogue
The Fallacy of The Centre
The Word Becomes Flesh
Dog Marxism
I Am Not A Pixel
Waves of Faith
Freedom vs. Freedom
Camille Paglia
Spirituality via Slaughter
You Can't Define What You Can't...
The Wrong Kind of Enlightenment
A Dutch Knack for Apartheid
End of the Ride
New Labour's nemesis: the BNP
Public Theology
BNP Celebrates Diversity. Oops!
Not all Pride is Equal
Not all Anthems are Equal
Postmodernism Generator
Theories change. So what.
Repetitive Brain Injury
More Less Is Not More
Home Isn't Where The Heart Isn't